“Well, the fish are definitely on the bite at this time of year in Bowen.
The photograph captures a novice fisherman enjoying the tranquillity of an
early morning fish along the water’s edge of Queens Beach. Along with
soaking up the sun’s rays as it steadily peaks its head over the horizon,
there have been a few flat head and mackerel ending up on the dinner plate.

The present temperature in Bowen during our mostly cloud free days range
from around 10 to 25 degrees Celsius. Why not stay with us at Queens Beach Tourist Village and find out for yourselves what the Climate in Bowen during the winter months is really like?” 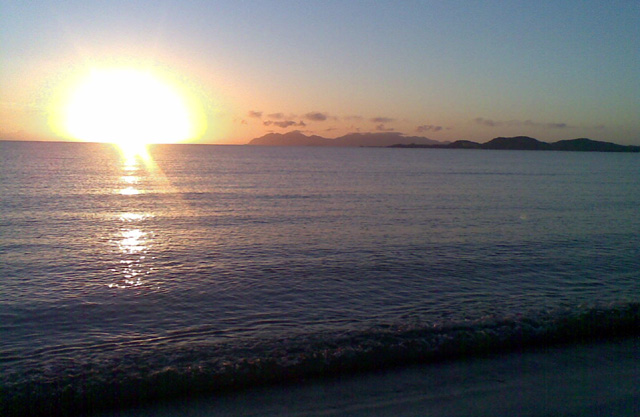 You have all heard the phrase ‘The rains are comin’ ma‘. Well they have now thankfully all finished up here in Bowen, North Queensland.

Last week alone we received over 700mm of rain. Bowen itself had escaped much of the torrential, flooding rain over the summer months, as we usually do, even though this year’s rainfall was much higher than recent years.

The lawns and parks are looking an absolute treat though.

With the rains gone, there has been a substantial drop in temperature
already and the sun is a pleasure to be in.

Walking along the shores of Queens Beach on day break is just magic at the moment, as the photograph above shows.

Is it any wonder so many people love coming to Bowen, to enjoy the
tranquillity of a small town surrounded by the beauty of our beaches?

“We in Bowen North Queensland were lucky to escape the real brunt of recent category 3 cyclone Ului. When it came to our attention as a category 5 cyclone some 1800km to the east of our shores, it was of minor concern other than we better keep on eye on it just in case. As it moved slowly toward our coastline its intensity did not wane for some days which made us sit up and start taking notice of the weather presenter again. As it continued to approach it thankfully started to decrease in intensity, down from 5 to a 4 and then to a 3. You could sense the relief amongst North Queenslanders. We were all hoping at this stage that Ului would continue to weaken as it approached east of Townsville. Then it started a more downward direction, being east of us in Bowen where it continued its descent through the Whitsunday Islands and onto land close to Airlie Beach, some 80km to the south of us.

Here in Bowen we experienced the loss of power from about 1.30am on Sunday 21st March. No longer could we monitor the cyclone’s path on the computer. The winds really started to howl, and I mean howl, through the trees in the park and across the road from 2.30 through to about 4am. It was in direct contrast to what we had been experiencing just 12 hours prior to its arrival. On Saturday we had been out and about cleaning up the park with little wind and no rain at all. We were all wondering whether we should be making such an effort to clean up after all. This is obviously how people can get caught out by being too complacent.

And then the big blow was gone, thankfully. Our experience, the most northerly edge of the category 3 cyclone was heading west toward Collinsville. Fortunately, Ului was diminishing as it moved across the land, ending up as category two just 75km west of Bowen. It decreased in intensity further, down to a rain depression some 200km from its initial impact on the North Queensland coastline.

Residents in Bowen were considered the lucky ones as power was returned to most of the township by about 10am that Sunday. Areas to the south such as Airlie Beach, Midge Point and down to Mackay, 200km away, continued to be without power for days to follow as the supply network had been severely damaged by the gale force winds. After the ordeal, it makes one reconsider, particularly those in small business as we are, the value of your property in regard to insurance. Something as brief as a natural phenomenon like this could ruin your livelihood totally in a matter of hours without the proper cover. We will be reviewing our schedule.

We have lived in central and northern coastal regions of Queensland all our lives. If cyclone Ului was category three, we would definitely not want to be around to see and feel the effects of a category 4 or 5 cyclone. You really do have to feel for those that experienced Darwin’s Cyclone Tracey and Innisfail’s Cyclone Larry.

Nevertheless, it is business as usual for us at Queens Beach Tourist Village Bowen. Easter and the following school holiday period look to be shaping up well with a near capacity in the park. There is going to be plenty of family and friends camping on the lush green grounds and our 4-star rated self-contained ensuite cabins are again popular this year”.

Enthusiastic management can transform a Caravan Park.  Ernie and Morag Parker have done this at the Tropical Beach Caravan Park in Bowen Queensland.